Its hard to believe that in 6 short weeks baby cockatiels go from this helpless tiny ball of  fluff,
to a self reliant young adult, who is ready to share its life with you! 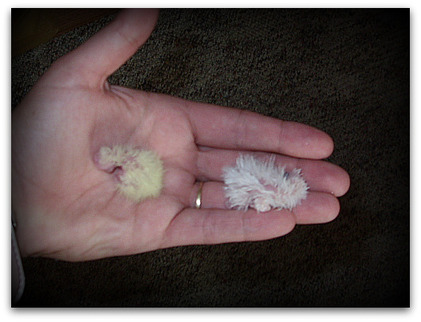 Two one day old baby cockatiel chicks
The two baby's shown here are just a few hours old, and have had a chance to dry off a bit.  White face baby's are born with white down feathers all others are born with yellow down feathers.  The baby pictured here on the left is a lutino hen and the one on the right is a white face grey cock.  I know this because these two baby's have already grown up.  There are more pictures of them, and their siblings, further down the page.  I start handling the new baby's soon after they are born, so that by the time their eyes open at around 10 days old, they are already accustomed to being handled.  Unless earlier intervention is required, I usually start hand feeding at two weeks, and then I only take over a few feedings at fist.  At three weeks I will pull them and hand feed exclusively. 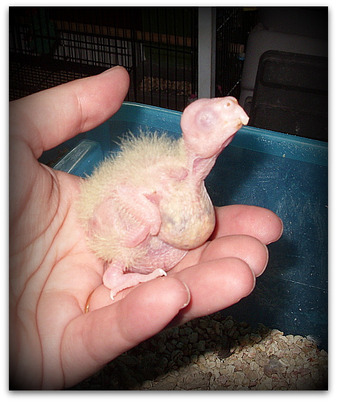 One week old Lutino cockatiel chick
As you can clearly see, in one short weeks time, this baby has grown a considerable amount, and has gained strength enough to hold her own head up.  Even though they are not yet open, notice the eyes are pink?  This is a lutino chick.  Had it been a cinnamon for example the eyes would have been slightly darker and had it been a normal they would have been significantly darker.  Starburst, as she has been named, was a bit of a surprise to me, as her father was a cinnamon and the chances of getting a lutino chick from him were very small.  Not only that but as she grew, and her feathers started coming in, I also discovered that she was also pearl as well.  Something I have wanted for a very long time.  A cinnamon pearl pied lutino hen!  Because male pearl cockatiels loose their pearling, usually starting at their first molt at 6 to 8 months old, I was visually looking for a bird that would keep the pearls into adulthood. She will also pass on those lovely pearls to any future sons she has, and they in turn will pass them on to their daughters. 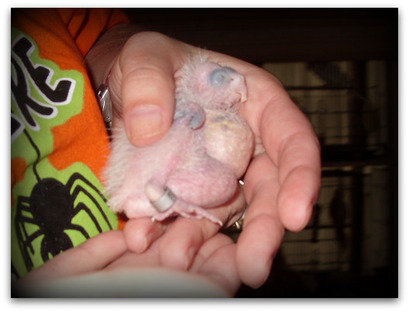 Banded, a 10 days old cockatiel chick
I band all my birds with NCS legg bands between 8 and 12 days of age, depending on their size.  This is a reliable form of identification, and as they grow it will be nearly impossible to remove without a vet.  I have weighed the pros and cons of banding, and have decided that as a responsible breeder, it is what is best for them.  If your bird ever gets loose or is stolen, you have proof that they belong to you.  A band also contains valuable information about the bird including a breeder code, mine is NCS 13W, a number [I use the birth and banding order], and the year it was born.  Also if you decide to show your bird, an un-banded bird cannot go up on the show bench, further than novice.  At this age the baby's don't even notice it's there. 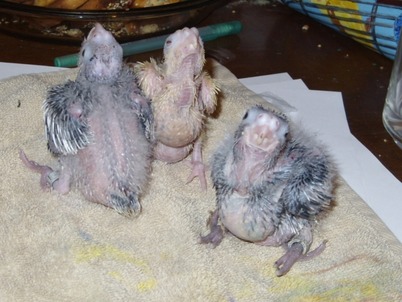 Messy two week old cockatiel chicks
By this time the pin feathers are really starting to come in and an experienced breeder can usually tell what colors they are going to have.  In this case there is a white face cinnamon [on the left], a lutino [in the middle] and a white face grey [in the right front].  The first place feathers come in that give an indication of what color you may have is the crest, then the wings and finally the body feathers.  These baby's faces are covered in hand feeding formula, because they just finished eating.  Their crops are full and they are ready for some play and then a nap.  They are now starting to look more like birds and less like prehistoric creatures.  This is my personal favorite time in their growth and development, because it is where the real bonding occurs and trust in humans is formed. 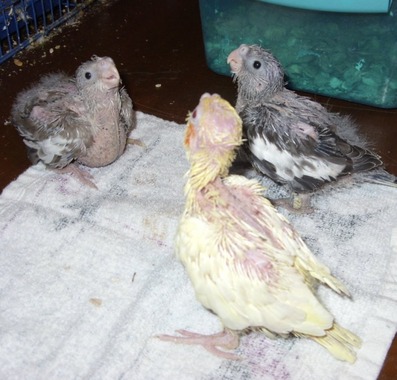 Feathers are coming in nicely
An amazing transformation has taken place over the last week and feathers are really starting to come through.  The baby's are much more active and definitely more interested in human interaction.  It is at this age that they are pulled from their parents and nest box, placed in a brooder, and hand fed exclusively.  On average they will eat every 4 to 6 hours through out the day and sleep through the night.  This is also the age where they are introduced to other family members and pets.  The colors of these baby's is really evident and the orange cheek patches of the lutino are very clear now.  White face baby's do not have cheek patches, just an all white face.  The juvenile color will stay into adulthood on a hen, but a cock will develop an all white face at maturity. 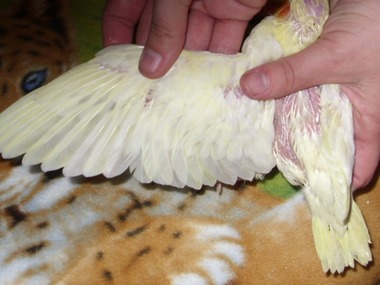 Feathers fully developed and growing rapidly
At this point, most of the feathers have come in fully, and the sheath covering them has fallen away or been preened off.  The color is really prominent now.  Another week and this baby will look just like the adults, except slightly smaller.  Because they are used to being handled, there is little resistance.  They have been trying soft foods like carrots, greens, bread, sprouts and cooked eggs and started experimenting with the feel of seed in their mouths.  However, they still occasionally beg for food and still get 2 feedings a day.  I will wait yet another week, even after they are eating and drinking on their own, before considering them weaned, and ready for their new home. 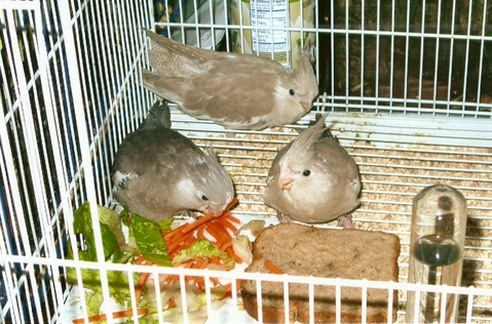 Fully weaned and eating on their own
Most baby's hatched here are fully weaned and eating on their own by now.  They have been moved from the brooder to the weanling cage, where they will remain until their new family comes to pick them up.  I do not over breed, so they rarely stay there long.  Any baby that I plan to hold back, will go from my office into my bird room in its own cage or with another of similar age.  By this age they have already learned basic commands such as step up, step down, and no.  The baby's feathers are in fully now and they look more like the adults.  Pictured here are two white face cinnamon  and one white face grey.  They are happily eating fresh food, which is offered daily to them.  I use glass water bottle and clean them at least twice daily.  At this age they look just like adults, except slightly thinner.  They should be weighed daily now, to make sure they are eating enough and gaining weight, Sometimes a baby will revert and go back to begging for food again.  If this happens they will need to go back on formula. 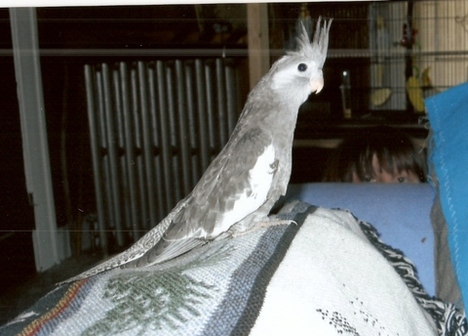 All grown up and ready to share their love with you
All grown up and what a beautiful bird he has become!  Its hard to believe that just 6 short weeks ago this baby hatched from an egg about the size of your thumb.  The baby pictured here belongs to my daughter Karen.  When he was 10 weeks old, Twilight placed 6th best novice at a show in New Hampshire.  An amazing accomplishment for one so young!  At this age they begin to plump up and really look more like the adults.  Eating and drinking on their own, craving human interaction, and waiting for a new family to take them home.  Won't you make an appointment to come and see us today?  I sure hope so!  I will be available to answer any questions and help you in any way I can, for the life of your new friend.  Remember that here at Sweet Pea Aviary friends aren't just made, they're hatched!

Into young adulthood and beyond... 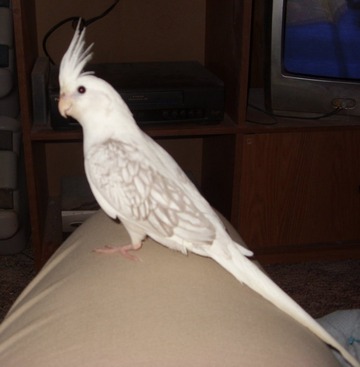 Quality over quantity always comes first
I hope you have enjoyed watching these baby's grow up before your eyes.  What an amazing miracle to see!  I take great pride in being able to provide birds of quality over quantity, and will continue to work toward the goal of meeting the NCS standard.  To read and see more on the show birds I have produced, please go to the "shows" page.  Any baby's I hold back will either be show birds, future breeders, or both.  All others are sold as pets or to other people who would like to start showing.    This beautiful white face cinnamon pearl pied hen will be shown in the spring.  She has a nice head package, good conformation, uniform markings, and best of all she knows she's a winner!  What more could a proud "mom" ask for in her "kids"? Thank you for stopping in and please check in periodically to see what we have for new baby's, and updates.  Blessings Ruth

All pictures are the property of Sweet Pea Aviary and cannot be copied or used without written consent, thank you.